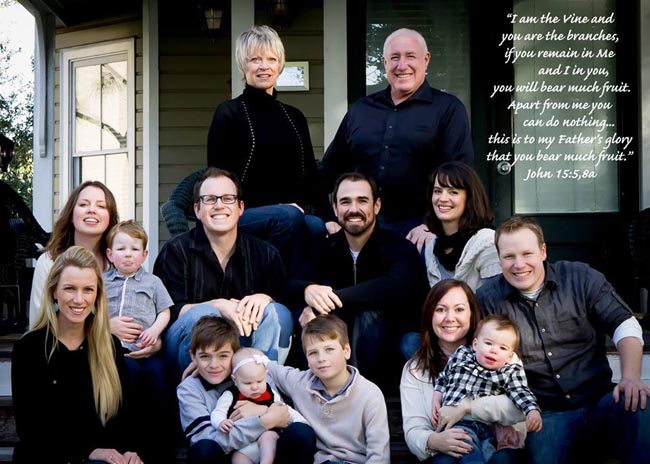 Tip & Laurie both trusted Christ at a young age. Tip, at Calvary Baptist Church in Casa Grande, Arizona and Laurie in a Vacation Bible School at a Bible church in Meeker, Colorado.

Tip attended Arizona State University and gradually went from involvement in the Baptist Student Union to Campus Crusade for Christ. He met Laurie during his sophomore year at ASU. Tip became Youth Pastor at Church of the Redeemer in Mesa, AZ as well as student leader of Campus Crusade at ASU while doing his student teaching during his final year. He graduated on June 2, 1970.

Laurie attended Grand Rapids School of the Bible and Music for a year, BIOLA University for a year and Arizona State Univ. for two years where she met Tip. She sang in a group called “The New Beginning” while attending ASU. Laurie was crowned Miss Wool of Arizona her junior year and competed in the national pageant in San Angelo, Texas that summer. She majored in nursing and joined Campus Crusade staff in 1969 to travel with Campus Crusade’s singing group “The New Folk.” Laurie worked for two years at Patricia Stevens Modeling Agency as an Instructor and receptionist.

In June 1970, Tip graduated from ASU and Laurie finished the tour. They were married on June 6, 1970 and assigned to the Univer­sity of Alabama. Tip ministered mainly to football players and taught Sunday school (12 yr old boys) at South Highlands Baptist Church in Tuscaloosa, Alabama. Laurie ministered to college girls at the university. In 1972, Tip & Laurie recruited heavily for the largest Christian training conference in history of 85,000 in Dallas, Texas called EXPLO ’72. Tip appeared as the featured college student in a Billy Graham financed documentary film called “Spiritual Explosion.” Laurie appeared as his girlfriend.

One of Tip’s assignments at the University of Alabama was to plan and organize the ministry visit of Campus Crusade’s Athletes in Action Weight­lifting team who later asked Tip to do the same thing for them nationwide. Tip & Laurie accepted the challenge and worked with AIA for two years based in Tulsa, OK. Tip was asked to be youth pastor at Tulsa Bible Church in 1974, but he and Laurie decided to go to the mission field with Campus Crusade in the Republic of Ireland.

They arrived in Galway, Ireland in Jan. 1975 where they worked with Irish college students for nearly twelve years. The first six years were at Univ. College Galway. Laurie was the women’s training director until their first son, Trey, was born in 1977 and their second son, Jason, was born in 1979. Tip was the campus director for two years and in 1980, they moved to Dublin, Ireland to establish and direct the Training Center for Campus Crusade. He was also the campus director at Trinity College Dublin. Tip was a local preacher at Dundrum Methodist Church, on the church leadership team, and taught a high school Sunday school class. Their third son, Joshua, was born in 1981 and their daugh­ter, Trinity, in 1984.

In 1985 Tip was “loaned” to the Billy Graham organi­za­tion where he coordinated and super­vised the Billy Graham Crusade in Dublin by live satellite link (from Sheffield, Eng­land.) This was the first time anyone had organized a satellite con­fer­ence in the Republic of Ireland. Six thousand people attended three evenings and over 600 indicated first time decisions to trust Christ. In 1986 Tip’s first disciple in Ireland took over as National Director of Campus Crusade for Christ and they felt it was time to move on. Recently Tip and Laurie learned that there are over 96 house churches in the Republic of Ireland as a result of their ministry time in Ireland.

In 1986 they moved back to the U.S. where Tip completed his Master of Arts degree in Missions. He rejoined Athletes in Action and served as Chaplain for the LA Raiders, Rams, and Clippers over the next three years. In 1989 Tip transferred to Campus Crusade’s “New Life 2000: Manila” office to help evangelize the 8 million people in Manila, Philip­pines. In 1990 he was asked to work on the CRU leadership team of the vice president who directed CRU’s National Minis­tries in the U.S. Tip worked as his assistant until November 1991.

In March of 1993, Tip assumed responsibilities as Director of Human Resources for The Orlando Institute, Campus Crusade for Christ’s seminary at their headquarters in addition to a teaching role. After leaving the staff of CRU (formerly Campus Crusade for Christ, in 1999 Tip started Masterlife International. Tip & a friend, Kirk Bane, started Orlando’s Promise Keeper Task Force in October of 1994 and served as the volunteer local coordinator until the summer of 1995.

Tip and Laurie served for four years in Saddleback Valley Community Church led by pastor Rick Warren. Tip was one of the original Lay Pastors then served for a time as a senior and ultimately a District Lay Pastor. Laurie taught the Heart-To-Heart women’s ministry Bible Study each week, and was a featured speaker in women’s retreats for churches in the area.

Upon moving with the CRU (Campus Crusade for Christ) headquarters ministry to Orlando, they joined First Baptist Church of Orlando led by Pastor Jim Henry. Tip and Laurie taught various Bible study classes and Tip served on the leadership team for the Men’s Ministry.  He earned his Professional in Human Resources at UCF in 1995.  Laurie developed Passionate Hearts women’s ministry in 1995 and led conferences all over the U.S., as well as overseas.  Her book, One Passionate Heart, was published in 2002.

In August 2002, the Killingsworths moved to Lynchburg, VA, where Tip taught classes in missions at Liberty University, and was a pastor at Thomas Road Baptist Church for five years.  In 2012, Tip and Laurie returned to the mission field in Ireland, where they’d spent 12 years in the 70’s and 80’s.

The Killingsworths have three sons and two daughters.  Their four biological children were all born in Ireland, and have dual citizenship.

Trey was on the University of Florida Gator football team (1995-99), and is a graduate of UF.  He travels a lot as VP of Strategic Accounts of North Star Realty Securities based in Denver, but resides in Orlando, FL.  Trey and Jenny have two sons, Isaac and Sean.

Jason is also a graduate of the University of Florida, and is Senior Writer with Riot Games in Dublin, their European HQ.  He and his wife, Summer, have two children, Liam and Rowan.

Joshua is a supervisor at Construction Labor Contractors in Baltimore, MD.  He and his wife, Jenni, have three children, Noah, Charlee and Ethan.

Trinity graduated from Liberty University in 2006, works as a model, and lives in New York City.  She is also very involved in ministry opportunities, primarily in the Middle East.

Karis, our adopted daughter, has two daughters, Karissa and Grace.  They live in Atlanta, GA.