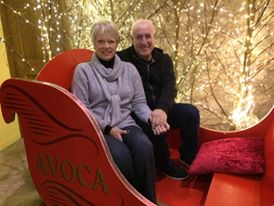 Our dear family and friends!

We often shake our heads at how quickly the years pass us by, and that it’s already Christmas 2018! What a year this has been! We’ve already passed the six year mark of being back in Ireland, and have fingers crossed and prayers up for one more year of residence visas so that we can apply for citizenship. The Irish immigration rules have changed a lot since we returned, even over the past year, so we shall see what the Lord has to say. Our current year of residence expires on January 2, so there’s a very real possibility that we could become “illegal immigrants” very soon. J

MINISTRY: Our year has been sprinkled with many varied ministry opportunities, including a wonderful ICEJ conference (The International Christian Embassy Jerusalem exists to connect the global church to Israel), speaking and teaching opportunities for both of us here in Ireland, ongoing discipleship with many, and assisting in the growth and development of a thriving young church.

FAMILY: It was a banner year for family trekking over to Ireland for wonderful visits! It’s such a blessing to have one of the branches of our family living about an hour north of us in Dublin year round … Jason, Summer, Liam (8) and Rowan (6). We had the joy of Trinity coming over in June to spend six weeks with us, and introduce us to our youngest grand, Everest (8 months old at the time)! Trey, Denise, Josh and Jenni came over for 10 days in September … the first time back for both Trey and Josh since they were teenagers!

Our annual trip to the U.S. was eventful, and we decided to shorten it so we were only gone for a month. Having our family all living in different states/countries, it means a lot of travel! Once my parents left us for their home in heaven, my three brothers and I decided that we would need to be proactive with biennial reunions since we live in Ireland, Robin and Susie in China, Tom and Ming in both Colorado and California, and Gary and Linda in Arizona. The eight of us began this new tradition with a week here in Ireland in 2016, and last summer a week in Quebec, Canada. From there we went to Maryland with Josh, Jenni, Noah (7), Charlee (5) and Ethan (3), then on to Arizona with Tip’s 92-year old mother and entire family, plus Gary and Linda. We concluded our trip with a week in Florida … Trey and family (our eldest grands are quickly becoming adults now that Isaac is 18 and Sean is 16), and our annual time of R&R at Daytona Beach. We’re so grateful that a wonderful friend provided buddy passes for our overseas flights, and our kids stepped up with providing our internal flights … since it’s usually us visiting them! J

ANNIVERSARY/BIRTHDAY WEEK: In early June, Tip and I finally managed to get out of the country for our birthday/anniversary week … to Portugal. Thankfully airfares within the EU are half nothing, and we wanted to take advantage of that. Even though Tip’s ICD went off coming into the airport in Faro, and scared us half to death, we’re so grateful for a wonderful week in Albufeira!

HEALTH: For the most part, we’re enjoying good health now that we’re in our threescore and ten stage of life. Tip has had some issues however, ranging from attacks of gout, to managing diabetes, to his heart issues. His ICD (Implantable Cardioverter Defibrillator) that was put into his chest in Virginia in August 2013, has gone off six times over the past four years due to his atrial fibrillation … three times in the past six months. Yes, that’s a concern, but all we can do is trust the Lord with his future … and ours. We greatly appreciate your prayers.

WEATHER: As you’ve likely noticed, the weather all over the planet has been rather insane this year … yet another sign of the times. We’ve had several named storms this year with high winds, lashing rains, localized flooding, power outages, etc. The icing on the cake was a blizzard in early March that left us snowed in on the top of our little mountain top for eight days with frozen pipes, thawing snow for water, having friends and neighbors show up with groceries, etc. We felt a bit like an episode of Little House on the Prairie! J

Thank you so much for your love and prayers throughout 2018 and beyond! How we pray that you and yours have a blessed Christmas season and an abundantly blessed 2019. We have to wonder if this will be the year that finds us all in the presence of the Lord … all of the signs are converging and we know that the return of the Lord is at hand. May we all be found faithfully involved in the harvest until that day comes.

Wishing you and yours an abundantly blessed Christmas and New Year!

It occurrs to us that many of you love Ireland, and might be interested in investing in our ministry here. Our monthly support level has progressively dropped over the past four years since we returned, and are in need of new sources of ministry funds to meet our expenses. Thank you so much.